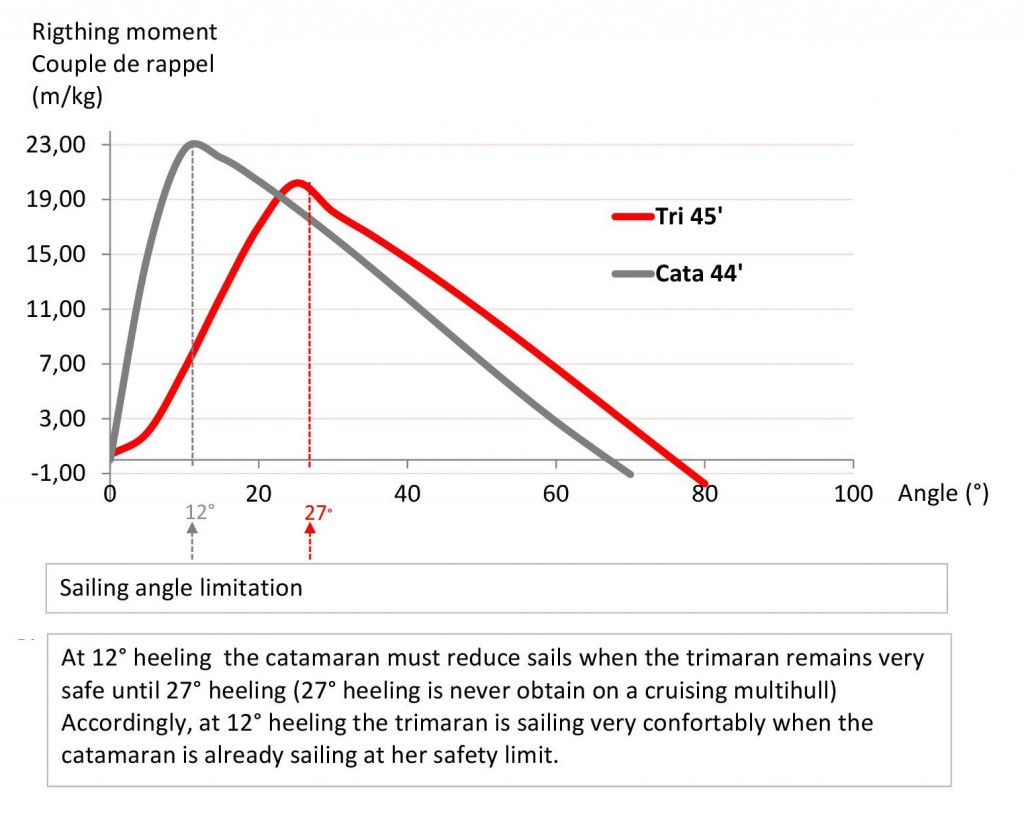 A trimaran is much more stable than a catamaran

The width of NEEL trimarans is an important factor for safety on the high seas because it is a guarantee of stability.

On a catamaran the maximum righting moment occurs at 12° heeling, as shown on the stability curve. This angle can be reached relatively easily when sailing in strong winds and heavy seas.

However, on a trimaran, this maximum righting moment does not occur until 32° heeling, therefore in normal multihull conditions of use, this angle is never reached.

For this reason, and thanks to the centered weight distribution, a trimaran is much more stable than a catamaran. Weight being centered in the main hull’s technical compartment limits pitching and results in increased boat stability and therefore safety.
This also enhances handling performance and comfort in big seas. On the other hand, catamarans have no choice but to distribute the weights (engines, batteries, generator, tanks) on the ends of their two hulls.

The fin of the central hull protects the engine block and rudder gear. The shallow draft allows you to navigate close to the shore and enjoy the most beautiful anchorages. The high average speed optimises navigation planning, according to weather conditions. The fractional rig (mainsail, solent, staysail) facilitates short-handed operation, notably for duo crews. All embedded systems, such as refrigeration, electrical and electronic installations, energy generation and storage, fittings and rigging all benefit from our twenty seven years of experience in boat building.

NEEL trimarans are certified according to CE European standards by the French Institute for Nautical Certification and Standardisation (ICCN). 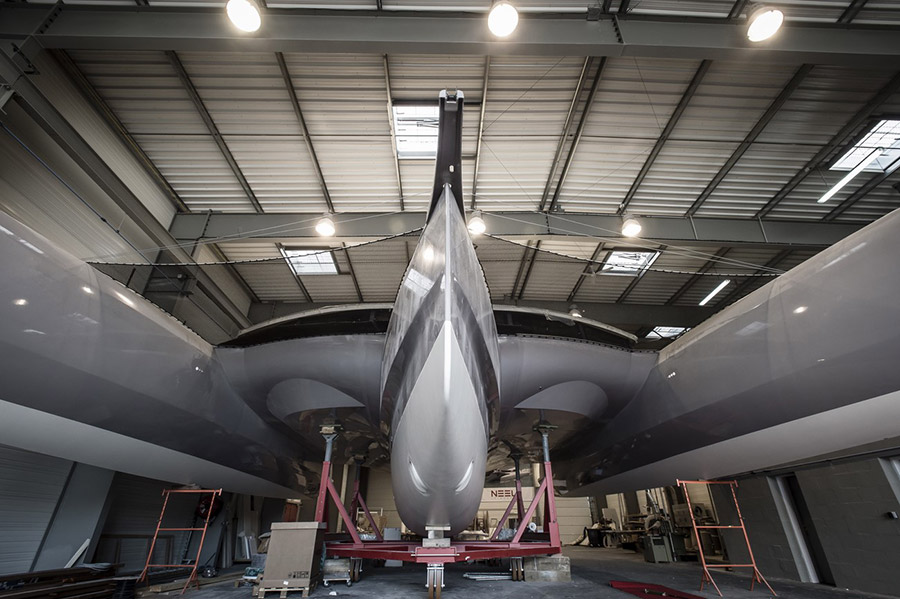 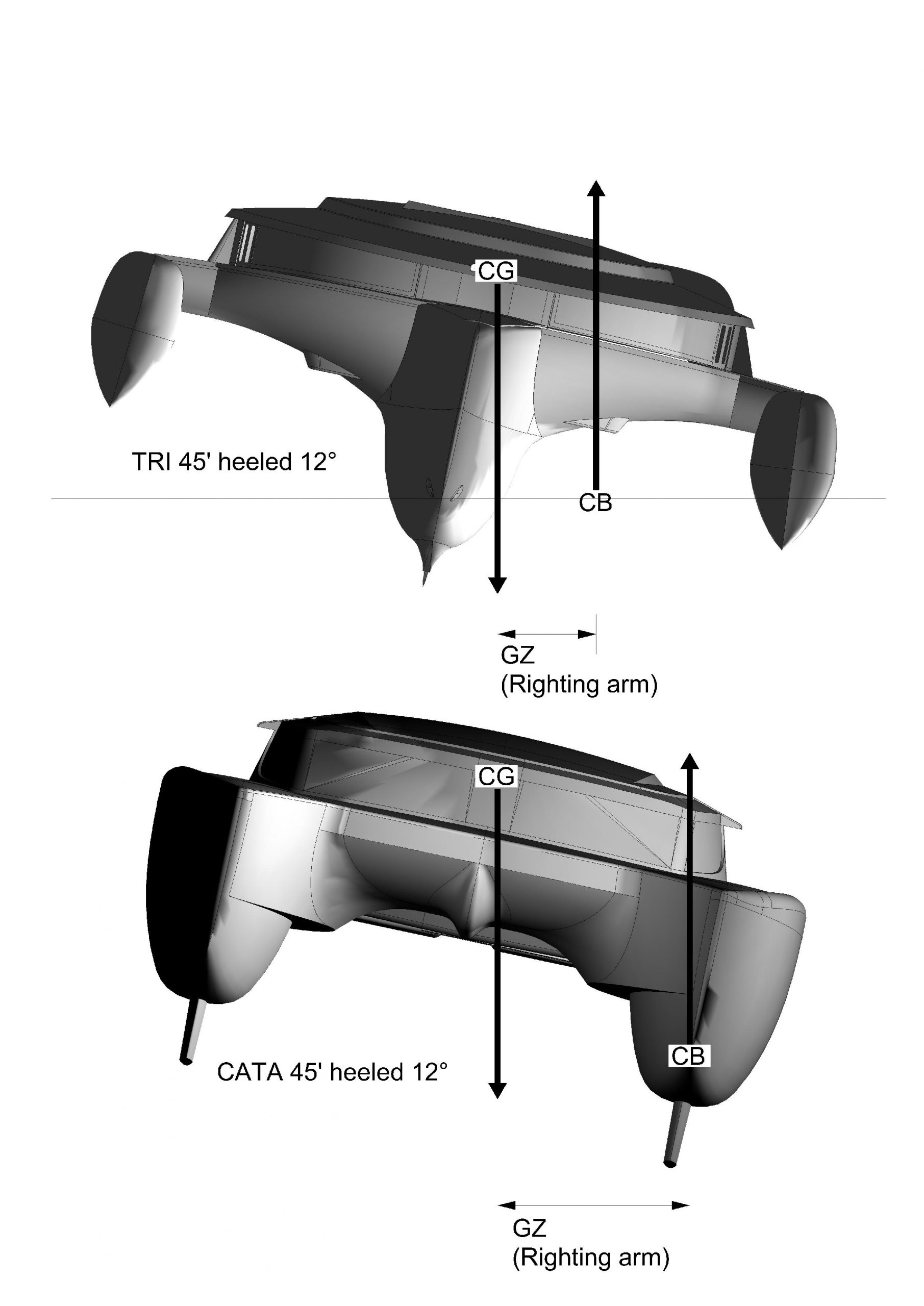 Let’s consider both the trimaran and the catamaran heeling by 12°, which is the safety angle not to be exceeded on a catamaran. As shown in the graphics, the Righting moment (GZ) is much higher on the catamaran than on the trimaran. A high GZ means more brutal and uncomfortable seakeeping.

At this angle of heel the catamaran’s GZ is double that of the trimaran.

The trimaran has less roll motion than the catamaran, as the center of buoyancy is never far downwind like on a catamaran. Again, centered weight is the key to success and comfort.

In fact, all significant heavy equipment is located in the main central hull on a trimaran whereas it is distributed half and half in each hull on a catamaran.

This superiority of the trimaran is even more significant in heavy seas as shown on the illustration here-below.

Any cookies that may not be particularly necessary for the website to function and is used specifically to collect user personal data via analytics, ads, other embedded contents are termed as non-necessary cookies. It is mandatory to procure user consent prior to running these cookies on your website.